Inochi2D is a free and open source 2D animation framework similar to Live2D, currently in beta phase. We can already use it for VTuber activities using their official streaming app, and a discussion regarding implementation of this framework in Ren'Py is already started by both Inochi2D and Ren'Py developers. You can learn more about the project here, follow their Twitter account here, or join their Discord community here.

Please note that Mannequin is not related with Inochi2D. If you want to support Inochi2D for the betterment of both the game development and VTuber industry as a whole, we strongly recommend donating via their Patreon, GitHub Sponsors, or contributing codes and translations to the GitHub repository.

To edit Inochi2D animations, use their official animation editor app (Inochi Creator) which can be downloaded from itch.io or GitHub.

Both Inochi2D and the Inochi2D export feature in Mannequin is still in beta. Backup your character often (especially your exported .inx file) and expect a lot of changes happening quickly as both Inochi2D and Mannequin develops further! 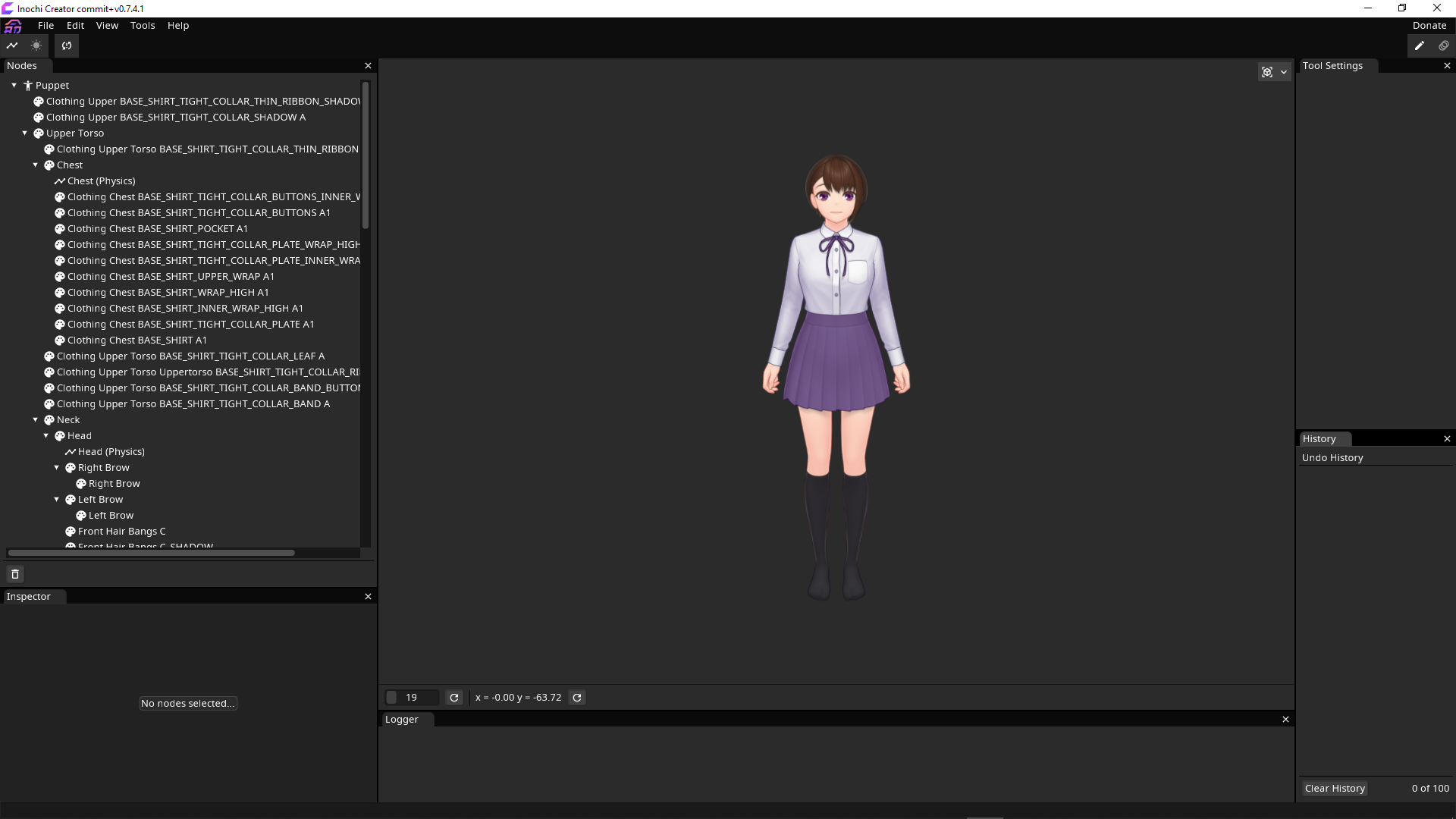 Instead of just exporting static character with layered images, you can also export pre-rigged characters with head turn, eye gaze, blink and lip sync already set up. Templates which are pre-rigged for Inochi2D are marked with Inochi Creator icon. 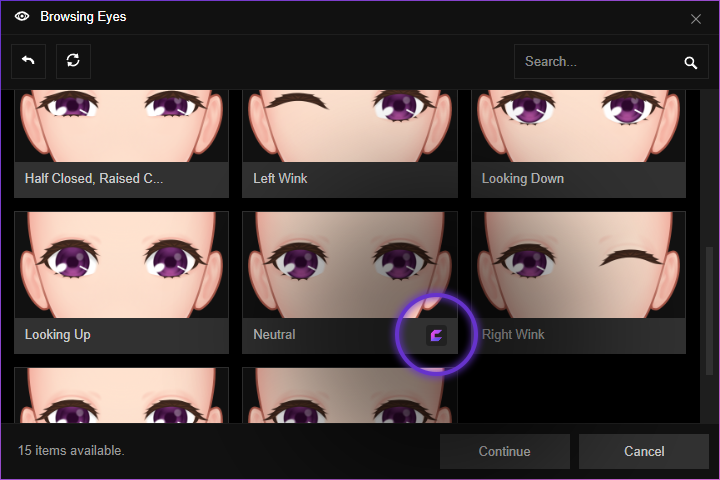 You need to use these marked templates for the following aspects of your character in order to generate a fully rigged output:

After making sure you have chosen proper templates for the aspects mentioned above, simply choose the Inochi Creator (.inx) format option when exporting your character. Now your exported character will have parameters already generated when opened with Inochi Creator. 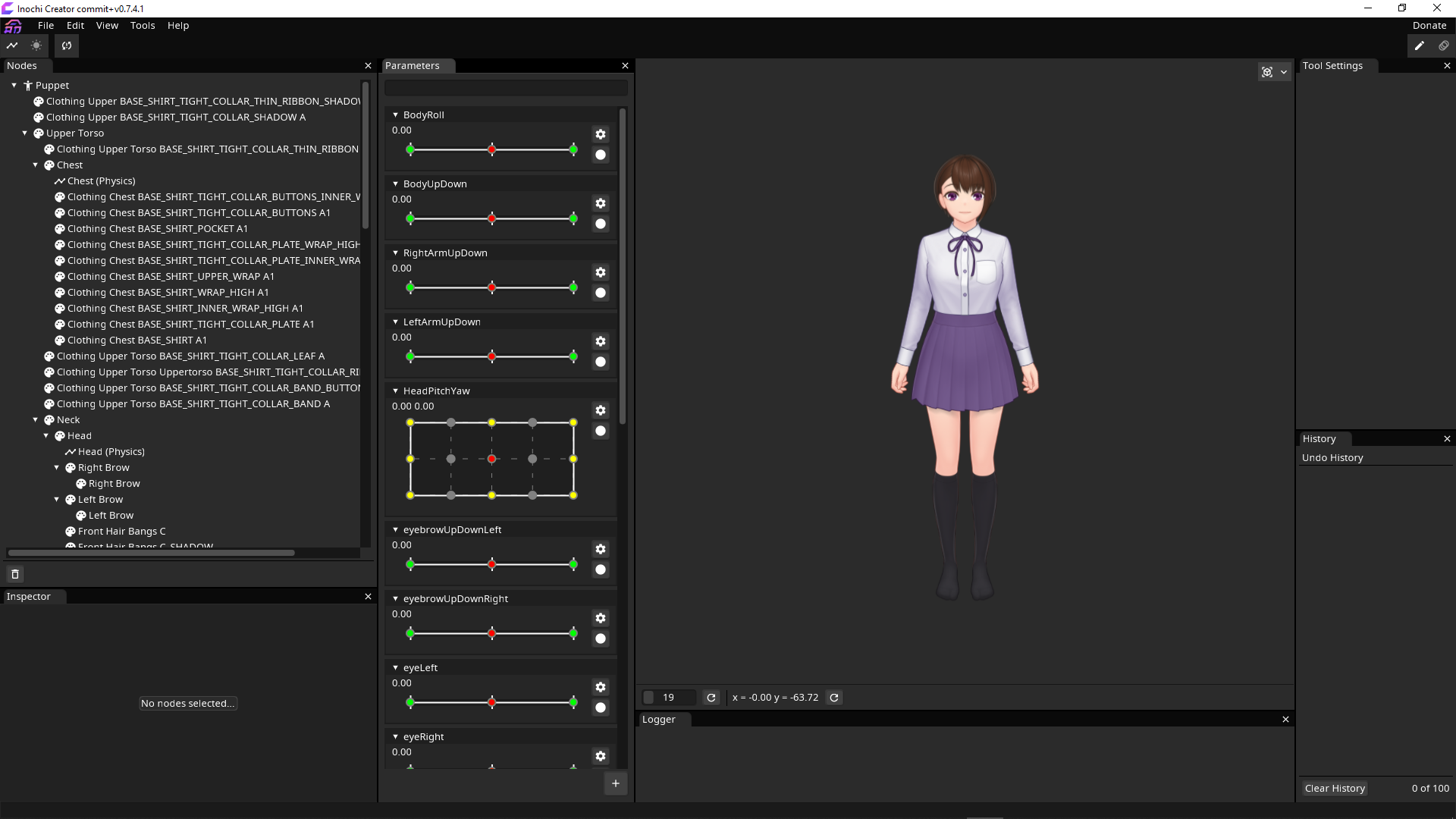 In order to use your pre-rigged character for VTuber livestreaming, first you'll need:

To set up OpenSeeFace tracking in Inochi Session, configure the virtual space by opening View -> Virtual Space. In the Virtual Space window that shows up, enter your desired virtual space name in the input field ("Default", for example). Then, click the + button to create a new virtual space.

After creating the virtual space, the next step is to add OpenSeeFace as a tracker. To do this, select the virtual space that you've just created, and in the right side of Virtual Space window you will see another + button. Click this button, and choose OpenSeeFace in the drop-down menu that shows up. 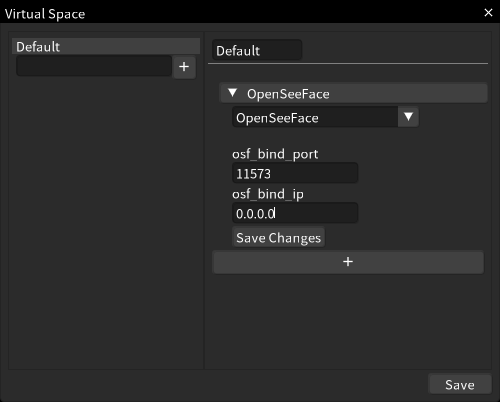 After that, click Save Changes and close the window.

After setting up OpenSeeFace in Inochi Session, you should run the OpenSeeFace tracker so it can start capturing expression from your webcam and send the data to Inochi Session. To do this, first extract the ZIP file that you got from the GitHub link above. Open the extracted folder, then open the Binary subfolder. Inside, you'll find facetracker.exe and run.bat. If you want to do some set-up first (choosing framerate, resolution, or if you have multiple webcam connected to your system) then open run.bat. Otherwise, you can open facetracker.exe for instant use.

To load your previously exported character to Inochi Session, just drag and drop the correspoding .inx file from file manager/explorer to Inochi Session window. If OpenSeeFace has already set up by following previous steps above, your character should immediately move according to the face tracker. 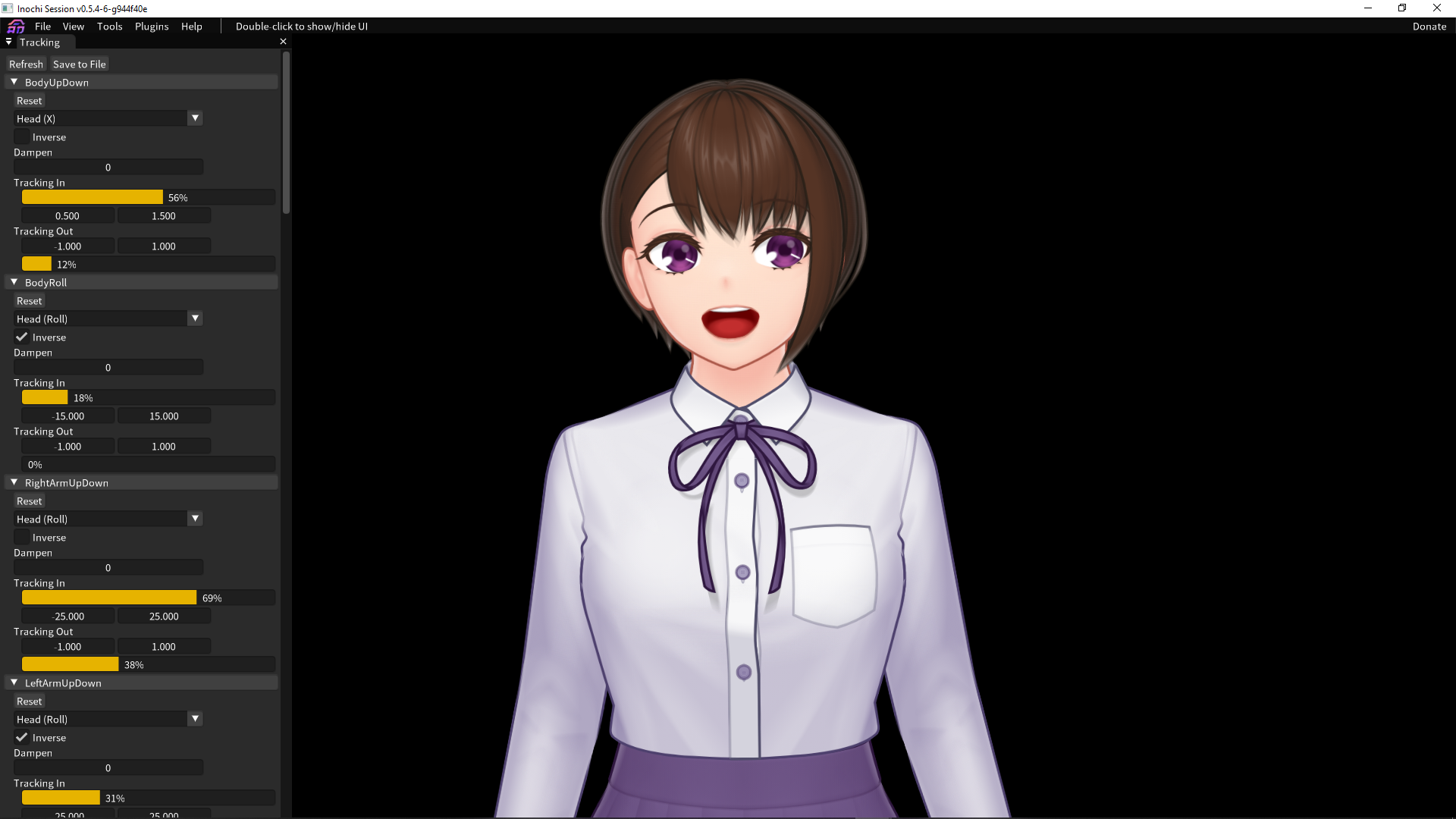 Now that your character is already moving in Inochi Session according to the face tracker, the next step is displaying the output into OBS. First, make sure you have already installed the OBS Spout2 Plugin from the GitHub link above. Then, add a new source in OBS and choose Spout2 Capture. 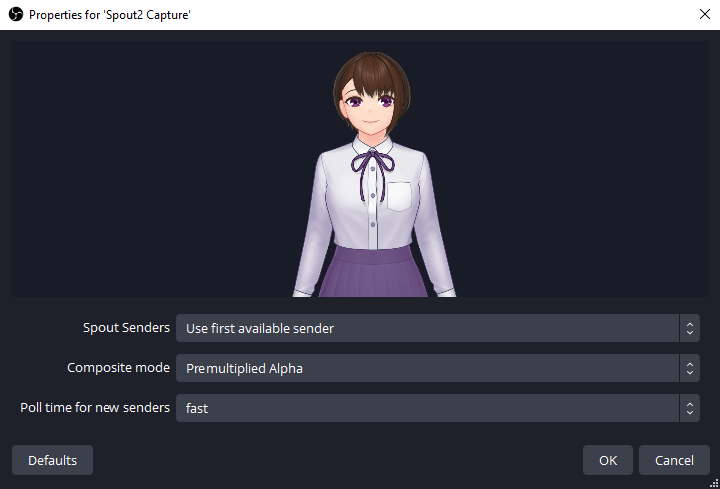 In the Properties window that shows up, use these values in the drop-down menu fields:

After that, click OK. Your character will now appear in the preview, with transparent background, ready to be composited to your stream! 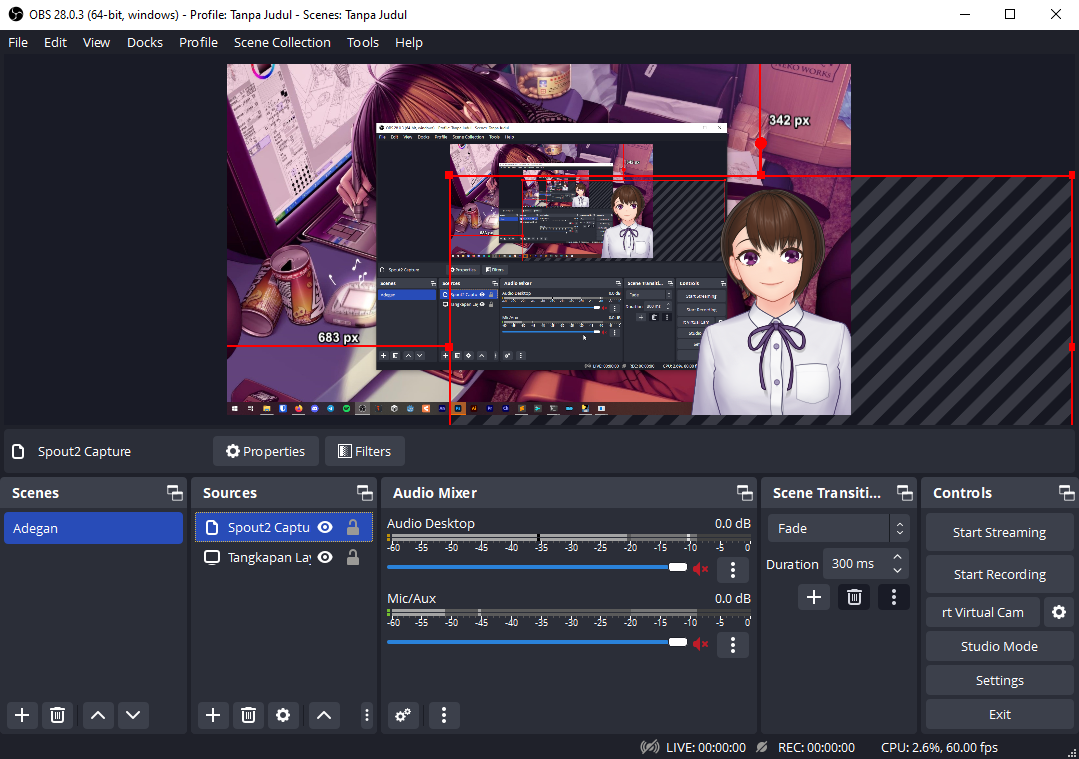 In order to improve performance in Inochi Session, consider doing these:

If you want to customize Mannequin's exported .inx file further using Inochi Creator, you can learn more about how to use it here.