A clothing template configuration file is a JSON file which should be located inside the /configs subfolder of your mod. There are specific rules for the filename of these files:

Valid values for [category] is tops, skirtspants, outerwear, footwear, and accessories. These determines the corresponding clothing template's categorization. [templateid] should only contains alphanumeric characters and underscores.

You can see various examples of these filename rules in the Default Library, which is available in the /library subfolder inside Mannequin's installation directory.

Below is an example of a clothing template file taken from the default library, clothing-tops_tanktop_vneck_untucked.json

name is the template name that will be displayed in Mannequin's user interface.

layer determines which clothing will be worn underneath or over other clothing items. The value of this property can be a number ranging from 0 to 4 or string with either one of these values: skin, under, base, middle, outer. The string values is just an alternative for numbers; for example, skin is the same as 0, outer is the same as 4.

Clothing templates with lower layer value will be placed underneath others with higher value. Clothing with the same category and layer value cannot be equipped together. When a conflict is detected, the one that has been chosen to be added by the user will replace the one that is already equipped.

defaultColors is an array of string which determines how many color groups your template has, and what is the default colors of each color groups. In this example, you can sww that we only have one color group, with the default color #EAE9EE. The color code inside this array should always follow the above example, in hexadecimal format with # symbol at the beginning.

If the array structure is changed to something like this:

torsoLength is an optional property exclusive to clothing templates which is categorized as tops or outerwear. This is used to determine the length of the torso part of the clothing, which is worn untucked. The value of this property can be either short, medium, or long.

You can also make a clothing template which is designed to be worn tucked. Let's look at this example taken from the default library, clothing-tops_tshirt_crewneck_shortsleeves_tucked.json

As you can see above, there are two different properties that is now present: tucked and fallback.

If the current skirt/pants waist height that is currently equipped is not found in the array or no skirt/pants that allows tucked tops/outerwear is equipped, then the template file set in fallback property will be used instead. In the example above, clothing-tops_tshirt_crewneck_shortsleeves_untucked.json will be used as fallback. Note that 'clothing-' in the beginning and '.json' extension at the end is not used in this part.

Now how about the skirts/pants related to this tucked/untucked behavior? Let's see an example below, clothing-skirtspants_a_line_skirt_short_highwaist.json taken from the default library.

In the example above, there is another unique property, which is tuckable. This property is used to set the corresponding skirt/pants template as compatible with tucked tops, and define its waist height. The value of this property is of course one of the predefined waist height options already mentioned above: low, medium, and high.

The biggest part of each clothing template configuration is of course the layers data. The layers property is an array of objects with information regarding what graphic asset to use, in what position and other related things. Below is the layers part of the first example file above, clothing-tops_tanktop_vneck_untucked.json

As you can see, the most essential properties of each object is bindTo and componentName. bindTo determines what layer/body part this particular object will be rendered over, and componentName is the unique part of the SVG file that will be rendered. To see the list of available body part codes, check the pose template files that is available in the default library folder (pose-*.json files).

The exact SVG filename that will be used is constructed using this pattern:

The values for variant and pose are taken from the current base template data and pose template data, available in the default library folder (/library subfolder inside Mannequin's installation directory). You can see it from the example below. First is from the base template file template-female_a.json

And second is from the pose template file pose-female_a-standby.json

Based on the template files above, if we take this clothing layer object:

And formulate a filename based on the rules, it will return: clothing-lowertorso-under_tanktop_medium_length_stretch-a-1.svg

By default, Mannequin will look for this SVG file inside the default library folder. If you are making your own DLC and want to use your own graphic assets inside your own DLC's /components subfolder, you can add [your_dlc_authorid]:[your_dlc_id]/ at the beginning of componentName. One example is available below, taken from the included Christmas Collection DLC.

colorGroupID is the index that will determine the color group of this particular clothing layer object. Not putting this property will leave the corresponding object out of any color groups, which means that users will not be able to change its color.

For tucked tops and outerwears, componentName can be an object instead of string. Here is an example from the default library, clothing-tops_tshirt_crewneck_longsleeves_tucked.json

As you can see, the object contains three properties: low, medium and high, each containing the specific component name for the corresponding skirt/pants waist height. If the clothing template is set to be only compatible with medium and high waist height, for example, then the property low can be left out.

For skirts, componentName can also be an object. Here is an example taken from clothing-skirtspants_pleated_skirt_short_highwaist.json

match can be used in addition to bindTo for more flexibility in layer order. Using match alongside bindTo will limit the effect of bindTo to just layer positioning. Below is an example from clothing-outerwear_blazer_double.json

By using deformTo, the chest shape will change to [originalshape][deformTo]. For example, if the original chest shape is a, then it will become a1. Therefore, the filename of the clothing asset should now use clothing-chest-base_tshirt_stretch-a1-*.svg instead.

The color palette of your clothing templates' graphic assets should always be limited to these:

Cast shadows must be separate SVG files because a different blending mode will be applied to them.

To prevent clipping when multiple clothing items is used at the same time, always use the graphic assets of body template as starting point. From that, expand the thickness of your clothing graphic asset by 0.5 pixel depending on the designated clothing template layer property, starting from under to outer (or 1 to 4 if you prefer to use numbers). 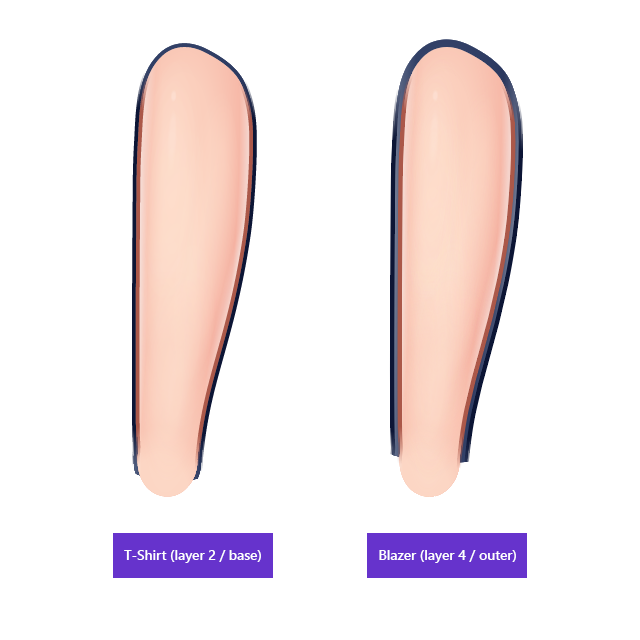 Of course, most clothing is not skin-tight and we want to use a more diverse shapes for our clothing template. This is where wrap layer is used, utilizing the boolean property removeWhenWrapped set to true. Below is the graphic assets for sweater/hoodie, the lower torso part:

By setting the removeWhenWrapped property to true for the 'wrap' layer object, it will be removed when other clothing layer object is rendered in front of it, thus avoiding clipping.